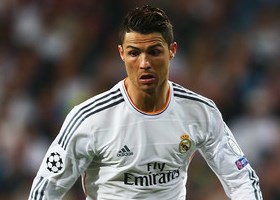 French international striker Karim Benzema netted a 19th-minute goal at the Santiago Bernabeu to give the Spanish giants a slight advantage heading into next week’s semi-final second leg in Germany.

Ronaldo, who has been suffering from the flu, was replaced by Gareth Bale in the 73rd minute after helping set up the only goal of the contest with a clever pass to Fabio Coentrao who played in Benzema for a tap-in.

After the match, Ancelotti spoke about sacrifice within his team and highlighted the former Manchester United star for the role he played for his team.

“I had already decided that Ronaldo wouldn’t play 90 minutes because he was out for a while,” said Ancelotti in his post-match press conference.

“Bale and Cristiano will both be totally fit for the second leg in Germany. What is important is sacrifice. (Angel) Di Maria and Isco made sacrifices and that helped the team a lot.

“Ronaldo wasn’t in his best shape, but it was important for us that he played. We are happy.