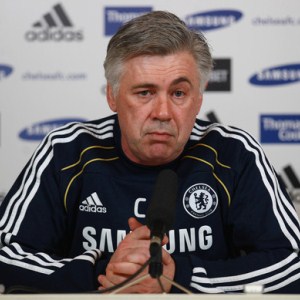 Chelsea manager Carlo Ancelotti has admitted that the club’s their title defence is over.

The reigning Premier League champions trail leaders Manchester United by ten points and the Italian admits they now need to focus all their efforts on qualifying for next season’s Champions League.

He said: “It’s difficult to think we can come back to fight for the title. To close the gap is very difficult.

“It is better for us to think game by game in the Premier League. We have to reach the minimum of fourth place in the table. That’s the most important step.” Chelsea and Real Madrid do battle for Roma defender Juan