Reports are out claiming that Real Madrid coach Carlo Ancelotti is being linked with David Moyes’ job at Manchester United. 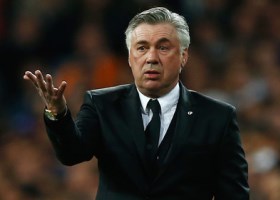 The Daily Star Sunday reported that the United board are weighing up their options for the summer should they decide current boss Moyes has to go.

And Real Madrid coach Ancelotti, himself under serious pressure at the Bernabeu, is one of the names being considered at Old Trafford.

Borussia Dortmund boss Jurgen Klopp, along with Atletico Madrid coach Diego Simeone, is also in the running to replace Moyes.

However, former Chelsea manager Ancelotti is favourite and could also act as the senior managerial figure while some of United’s class of ’92 – Ryan Giggs, Paul Scholes and Phil Neville – prove their worth as coaches.