Reports are out claiming that Carlo Ancelotti has put his hand up for a return to Real Madrid. 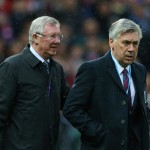 Real are reeling after their humiliation by Barcelona, with coach Rafa Benitez under huge pressure.

Ancelotti said: “The crisis at Real Madrid? Let’s be slow with our judgments because we are just at the beginning, the Real players have the ability to revive the situation.

“Real suffered against a really strong Barcelona. Benitez? It’s difficult to judge from the outside.

“From watching the game, they suffered most on the tactical level. Every Coach has his own ideas and it’s good that, for better or for worse, he takes them forward.

“Benitez-Ronaldo crisis? I spoke with Ronaldo last week, he never said he had a bad relationship with the Coach.

“He tows the line and always tries to help his team. When things aren’t going well, it’s obvious that the forwards have to suffer most.

“If Perez called me back to Real Madrid? I decided to take a year off, I already told you. Many teams have tried for me but I preferred to stay away for a year.

“Start again with Real after a year? Why not, likewise I could start over at PSG or Chelsea.”

Jose Mourinho : I Am Disgusted To Live In This World!

Real Madrid, Man Utd To Do Battle For Edinson Cavani Espanyol Wants Real Madrid To Get Serious About Kiko Casilla