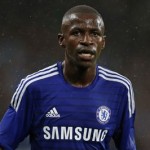 It has been reported that Real Madrid boss Carlo Ancelotti is pushing for Chelsea midfielder Ramires.

The Mirror claims that ex-Blues manager Ancelotti has identified the Brazilian international as the man he wants to bolster Real’s midfield.

Ancelotti was in charge when the west Londoners signed Ramires in August 2010 and remains a big fan of the hardman.

Real would have to pay around £25million for the 27-year-old, but Ancelotti believes they need more strength and depth in midfield. Cech : Chelsea Can Win The Champions League This Year