Reports have emerged claiming that Real Madrid boss Carlo Ancelotti has cast doubt over the future of Angel di Maria. 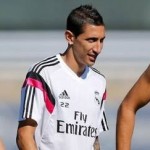 The Argentine international winger is being linked with Manchester United.

Ancelotti said: “I don’t want to enter into this theme so I don’t lose focus on tomorrow’s game. Di Maria is available like all the others. He may or may not start the game and has opportunities, but like everyone else.

“What I won’t do is put out the same team in both legs. One team will play tomorrow and on Friday I will change it a little.

“I don’t know what Di Maria has decided. But I know that he’s training and that he could help us in tomorrow’s match. Until August 31 it will continue the same way and after that everything will be cleared up and things will return to normal.” Man Utd’s David de Gea Back In Madrid, But Only On Vacation