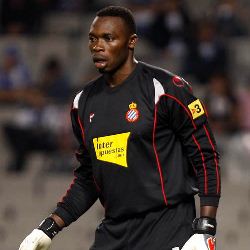 Carlos Kameni has declared that he would like to play in the English Premier League.

The Espanyol goalkeeper, who is a target for new Fulham boss Martin Jol, insists that he can see himself playing in England’s top flight but says that nothing has happened in regards to a move thus far.

The 27 year old Cameroon international told skysports.com : “Nothing is done yet, but things can move quickly in football, as you know,”.

“I want to experience another league and I have some contacts in the Premier League.

“I would love to play there. It is a fantastic league and a competitive league for keepers.” Espanyol Defender Hector Moreno Set To Be Offered To Arsenal

Espanyol Eager To Sign Philippe Coutinho On A Permanent Basis