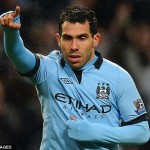 Carlos Tevez’s turbulent seven-year spell in England will end today when he joins Juventus in a deal worth potentially £27million to Manchester City.

Tevez, above, who had only one year left on his contract, will have a medical in Turin today before signing a three-year contract.

City officials were last night delighted with the deal that ends their fears of the player walking out on a free transfer at the end of his contract next summer. Juventus have agreed to pay £7.5m up front for the Argentina striker and will pay £2.5m in bonuses if they qualify for the Champions League in each of the three years of his contract.

They will hand over a further £2.5m if they win either Serie A or the Champions League in each of the next three years.

City will also save £17m in wages and bonuses they would have had to pay Tevez during the final year of his five-year contract. It could all add up to £27m – for a player who cost them £25m.