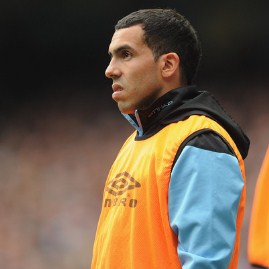 It has been revealed that Carlos Tevez stands by his blow-up with manager Roberto Mancini.

Edin Dzeko was replaced by Nigel de Jong in the second half and soon after the City boss asked Tevez to warm up, but Mancini claims he refused to do as he had been asked.

The former Manchester United striker, speaking through an interpreter, gave little away.

In an interview with Sky Sports News the Argentine said: “I have been professional during all my time here.

“Last season I was the top scorer and I wanted to leave for family reasons – but I keep trying to do my best.”