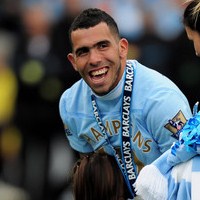 Carlos Tevez has declared he now wants to stay with Manchester City – despite interest from AC Milan.

The former Manchester United striker has now claimed that wants to stay on beyond this summer – with boss Roberto Mancini admitting he could go.

Yet, he has again hinted that he will eventually pursue a move back to his former club Boca Juniors.

He said: “My biggest wish is to finish my career in the Boca shirt. I am still thinking the same as when I left, I want to retire here. Now the fans should enjoy the team’s success. I am here for whatever Boca need.