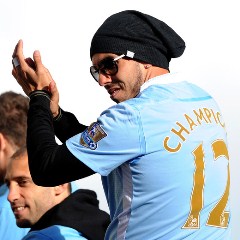 The Argentine striker has expressed his regret after he was pictured with a sign which read ‘RIP Fergie’ during City’s celebratory title-winning parade in Manchester.

Tevez, who spent two years at Old Trafford before leaving for City in 2009, said: “I got carried away in the excitement of the moment and I certainly didn’t mean any disrespect to Sir Alex Ferguson, who I admire as a man and a manager.”