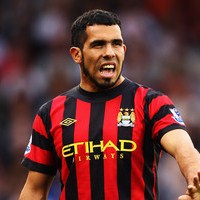 Reports have emerged that Manchester City rebel Carlos Tevez has rejected a move to PSG.

The Sun has reported that the Argentine star has snubbed a £10million-a-year deal at Paris St Germain.

Tevez, 27, said no to the big-spenders as he wants to join a club already established at the top of European football and challenging for major honours.

PSG football director Leonardo said: “We didn’t get a deal with Tevez, maybe we never will.”