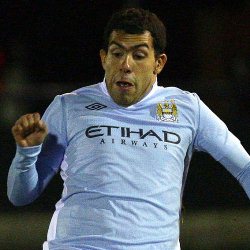 He scored City’s equaliser in the 51st minute when he finished off a cross from strike partner Harry Bunn from close range.