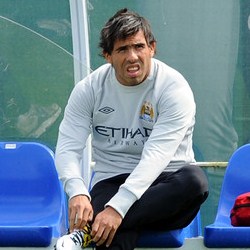 Roberto Mancini has revealed that Carlos Tevez will available for Manchester City’s clash with Bolton Wanderers.

The want-away Argentine striker did not feature in Monday’s 4-0 win over Swansea at the Etihad Stadium.

However Mancini has already made it clear he would be happy for the former Manchester United star to stay and will consider him for the game on Sunday.

Mancini said : “He will probably be available, although I want to wait until tomorrow to make a decision,”.

“He has worked very well in these two weeks.

“When Carlos plays, he always plays very well and gives 100 per cent. I think maybe he is not 100 per cent fit, but his mind is okay.”