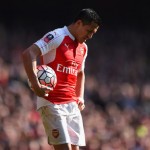 Reports are out claiming that Jamie Carragher is of the belief that Arsenal will struggle to get themselves into the form required to win the Premier League title.

The Gunners were knocked out of the FA Cup by Watford at the quarter-final stage on Sunday and are unlikely to get past Barcelona in the Champions League Round of 16 second leg this coming week.

They are also eight point behind league leaders Leicester City and are finding it hard to gain consistency which suggests to former Liverpool defender Carragher that perhaps they could end the season empty-handed.

“I think it will be difficult for them now,” Carragher told Sky Sports News HQ.

“Psychologically these defeats and going out of the Cup and Champions League – they’re out of that, forget the second leg – and then to lift themselves with the form they’re in.

“[Arsene Wenger] keeps talking about the spirit in the squad, but it’s more in hope and belief that it will come to the fore. The next home game is Watford and they’ve got two difficult away games in Everton and West Ham.”