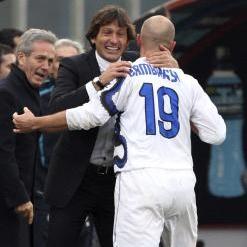 Leonardo’s perfect start to life as Internazionale boss continued as the defending Serie A champions came from behind to beat Catania 2-1 at the Stadio Angelo Massimino.

A devastating second half double from Esteban Cambiasso secured the points for the reining league champions after Alejandro Gomez had put the home side into a deserved lead.

Inter were made to work for the points by a spirited Catania side who dominated possession for much of the game.

But a second victory in four days ensures the Brazilian coach maintains a 100% record since taking over the reins left vacant by Rafael Benitez, adding to Thursday’s 3-1 win over Napoli.