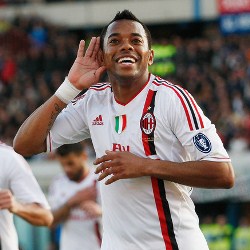 An off-colour AC Milan could only muster a 1-1 at Catania’s Stadio Angelo Massimino which nonetheless extended their lead at the top of Serie A to five points.

Despite an underwhelming display, the visitors took the lead through Robinho after 35 minutes and while Nicolas Spolli levelled in the second half, the Brazilian would have sealed victory for the hosts had the referee not ruled that his shot had been cleared off the line by Giovanni Marchese.

On the evidence of numerous replays it looked as if Marchese’s block might have been moments too late, but the goal did not stand and Catania held on to claim a point they deserved – all the more so considering that the hosts had a goal of their own from Alejandro Gomez chalked off for a very close offside decision.

Juventus can now prune Milan’s advantage at the top of the division back to two points with a victory over Napoli in Turin on Sunday evening.


Arsene Wenger Ready To Welcome The Arrival Of Lukas Podolski