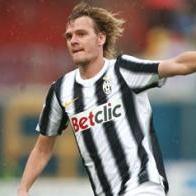 Unbeaten Juventus moved top of Serie A on goal difference despite being held to a 1-1 draw at Catania’s Stadio Angelo Massimino.

Antonio Conte’s side have won two and drawn two of their opening four matches in the league, but share top spot with Udinese after results elsewhere fell favourably for them with Genoa losing 2-1 at Chievo and Udinese drawing 0-0 at Cagliari.

Udinese and Juve share the lead with eight points from four games. Atalanta remain the only other unbeaten team after a 2-1 win over Novara.

Promoted Atalanta, who won with goals from Matias Schelotto and Luca Cigarini, have the best playing record with three wins and a draw.

However they have only four points after having six deducted before the start of the season in a Serie B match-fixing scandal.