It has been reported that Santi Cazorla is targeting more consistency with Arsenal this season. 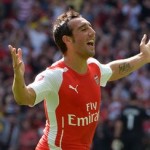 The Spanish international star is confident he can improve on last season’s performances and is hungry for more success after the Gunners’ FA Cup victory.

“My first season here was very good,” he told arsenal.com. “I managed to beat my scoring record – which had been nine with Malaga – with 12 goals.

“Last season I wasn’t so consistent because I struggled with ankle problems after a blow with Spain. For this reason I lacked consistency.

“But in the end we managed to win a title after so many years and hopefully this year I’ll be able to give 100 per cent physically and mentally in order to lift more trophies.”