Reports are out claiming that Petr Cech has backed Arsenal to recover from their worst-ever European defeat and qualify for the Champions League knock-out stages. 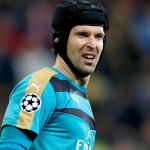 Costly defeats to Dynamo Zagreb and Olympiacos before a 5-1 mauling by Bayern Munich left the Gunners with one win from their first four games and perilously close to elimination.

“Of course we can still qualify,” he said.

“You win two games and we need to make sure the head to head against Olympiacos is in our favour and then we can go through.

“Everything is possible and we have two games to play. We have to regroup and continue fighting until the last minute.

“We are still in the position where we need to win our last two games and make sure we have a better head to head against Olympiacos.” Arsenal Eager To Complete The Signing Of Corinthians Midfielder Paulinho