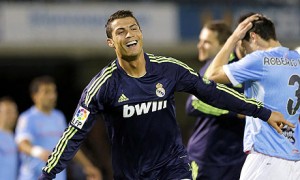 Ronaldo scored the goal that sent Real through to the last eight of Europe’s elite club competition at the expense of his former club and his latest double took his league tally for the season to 26. But the impressive total is still 14 short of his great rival and top scorer, Lionel Messi of Barcelona.

The victory was far from convincing but put the champions Real a point clear of Atlético on 58 points with 11 games left, 13 behind the leaders Barça, who won 2-0 at the basement side Deportivo La Coruña on Saturday.