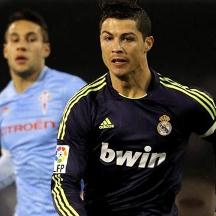 Real Madrid, the 2011 winners, fell two goals behind at La Liga rivals Celta Vigo but Cristiano Ronaldo’s late strike to make it 2-1 put the 2011 winners in a reasonably strong position ahead of next week’s second leg at their Bernabeu stadium.

Real struggled against a well-drilled Celta side in rain-lashed Galicia and fell behind when Mario Bermejo fired between reserve goalkeeper Antonio Adan’s legs from a narrow angle in the 54th minute.

Cristian Bustos made it 2-0 moments after coming off the bench in the 78th with a superb long-range effort that arrowed into the top corner before Ronaldo, who was lucky to be on the pitch after throwing himself into a couple of wild challenges, pulled a goal back three minutes from time.