Reports are out claiming that Celta Vigo striker Nolito is keen to hear from Arsenal. 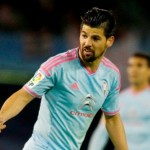 The Mirror says Arsenal are interested in a move for Celta Vigo striker Nolito, reports in Spain suggest the player would be keen on a move to north London.

It is claimed the 28-year-old would be keen to join Arsene Wenger’s side to link up with fellow Spanish stars Santi Cazorla, Nacho Monreal and Hector Bellerin.

The forward has hit five goals already this term and is reported to have a £13m release clause. Thomas Vermaelen Happy To Play Alongside Per Mertesacker