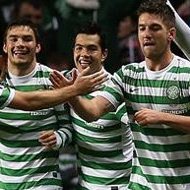 Parkhead witnessed one of its greatest nights as goals from Victor Wanyama and substitute Tony Watt gave Celtic a momentous Champions League victory over Barcelona.

It was a Group G clash that the Hoops were not supposed to win but the east end of Glasgow exploded in the 21st minute when midfielder Wanyama headed in from a Charlie Mulgrew corner.

It was backs-to-the-wall stuff for most of the game for the home side as the star-studded visitors hit the woodwork twice and goalkeeper Fraser Forster pulled off a number of vital saves.

But in the 83rd minute 18-year-old Watt, on for Mikael Lustig to make his debut in the competition, raced away to score the second, leaving Lionel Messi’s late strike a consolation.

Celtic, with seven points from four games, two less than leaders Barca, travel to Benfica before hosting Spartak Moscow in their final group fixture and will surely fancy their chances of reaching the knockout stages of the competition.