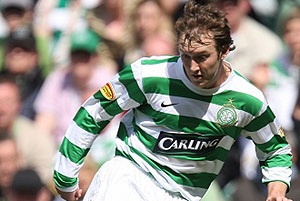 Celtic pulled four points clear of Old Firm rivals Rangers at the top of the Clydesdale Bank Premier League with a comfortable 3-0 win over Kilmarnock at Parkhead.

In a one-sided first half, goals from Aiden McGeady and Georgios Samaras gave the home side a deserved lead which could have been more convincing if not for some slack play in the final third.

Although Killie skipper Kevin Kyle missed three good chances with his head, Hoops substitute Niall McGinn, on for Paddy McCourt in the second half, put a proper perspective on the game when he grabbed the third in 78 minutes.