Reports are out claiming that Manchester United striker Federico Macheda could be on his way to Scotland in the summer. 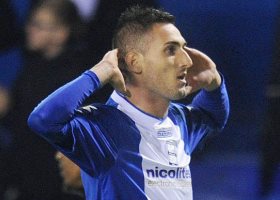 The Italian striker comes off contract at the end of the season and is currently on-loan at Birmingham City.

His representative, former Napoli star Giovanni Bia, confirmed the 22-year-old was wanted by clubs across Europe.

He said: “Federico has had some interest from Italian clubs, but he would prefer to continue his career abroad and is looking for someone who believes in him.

“In addition to the possibility of him staying in the English game, Rangers are very determined, but Celtic are especially so.”