It has been reported that Roy Keane is a target for Scottish giants Celtic. 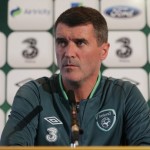 The former Manchester United captain has emerged on the radar of the Scottish champions following the recent departure of Neil Lennon.

Keane, who is the current Republic of Ireland assistant, has been approached by the Bhoys but an official offer has not yet been forthcoming.

“Roy has a lot to consider,” said O’Neill.

“I had a call the other day from (majority Celtic owner) Dermot Desmond wanting to speak to Roy if it was at all possible, and I mentioned it to Roy, of course.

“I am sure he was wanting to have a chat anyway, because a club like Celtic might not come around too often.

“It was just a really informal chat, I think.

“Of course I would be really disappointed if Roy was to leave us.”