It has been reported that Celtic could be the club to offer Craig Gordon a pathway back to top flight football. 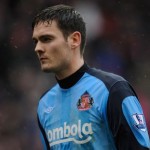 The 31-year old former Scotland international goalkeeper has been without a club since leaving Sunderland in the summer of 2012 after sustaining a serious knee injury.

Former Heart of Midlothian star Gordon has been back training with the Jambos as well as Rangers but more recently has spent time with the Bhoys.

The speculation regarding Gordon casts doubt over the future of England international Fraser Forster who has been linked with a move away from the Scottish champions in the past months.