It has been reported that Scottish champions Celtic will secure the services of James Wilson from Manchester United in January. 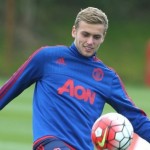 The Daily Mail reports that the Glasgow giants have been given the green light to land the 19-year-old striker on a loan deal when the winter transfer window opens in around 11 weeks.

Wilson, who has struggled for game time under Louis van Gaal so far this term, will spend the remainder of the 2015/16 season at Parkhead once the loan deal is complete.

Celtic boss Ronny Deila already has United defender Tyler Blackett on loan and will be eager to land Wilson as he is currently struggling for depth in attack with the goalscoring burden resting squarely on the shoulders of Leigh Griffiths.