Barcelona midfielder Cesc Fabregas has revealed that he never considered a move to Manchester United. 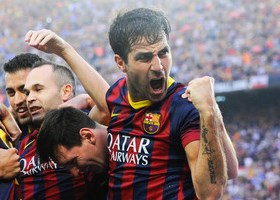 The Spanish international midfielder is a boyhood Barcelona fan and remains determined to forge a successful career at Camp Nou.

The former Arsenal star told the Daily Mail: “I never planned to go back this summer.

“It’s true that they had offers and they told me about them but the only thing in my head was staying at Barcelona.

“I saw the stories and I spoke with Darren (Dein, his agent) and he said: ‘What do you want to do?’

“I know that if a club come in for you and you tell your representative that you want to go, then you go. All that’s missing is that the club accept the offer. It’s easy.