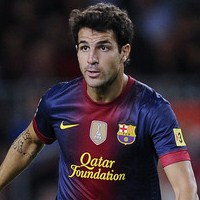 Cesc Fabregas insists that Arsene Wenger will continue to bring success to Arsenal.

The controversial sale of star striker Robin van Persie to Manchester United has prompted many to write off the Gunners’ chances this season, just like they did when Fabregas was sold to Barcelona last summer.

However the Barcelona midfielder argued in The Sun: “Arsene Wenger is amazing and I’m sure he will prove it again this season.

“He always finds the best young talent in Europe and has the courage to bring them in and give them their chance.

“That is his special talent, the way he works with a player to build their confidence and encourage them to play, to perform at their best.

“That’s why I’m confident that Arsenal will again be up there challenging.

“I hope so. I watch them every weekend because Arsenal still mean so much to me.

“It was a privilege for me to spend eight years at such a magnificent club.

“But now is a new chapter at Barcelona and I said when I signed here that it was going to be the most exciting and difficult challenge of my life.