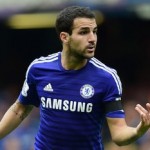 It has been reported that Chelsea midfielder Cesc Fabregas has quickly become a record breaker since his return to the Premier League.

The Mail on Sunday revealed that the Spanish international made Premier League history after becoming the first player to assist a goal in six consecutive games.

The Chelsea midfielder’s run follows on from his spell with Arsenal, when he set up goals in his final two top-flight games for the Gunners before departing for Barcelona in 2011.

Fabregas broke the record with two assists for Diego Costa in the Blues’ 4-2 victory over Swansea which keeps them top of the fledgling Premier League table.