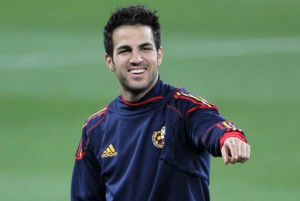 Post World Cup news are out and it has been reported that Spanish midfielder Cesc Fabregas has dedicated his World Cup medallion to Arsenal.

However the Arsenal captain was not completely convincing when questioned on whether or not he would remain with the London club for next season.

The 23-year old influential midfielder was a key player in the second half of Spain’s 1-0 final win over Holland, setting up Andres Iniesta’s goal.

Fabregas declared that the win was for the Arsenal people but also spoke about himself being an Arsenal player in the past tense which would give fans no more comfort as to whether or not he will remain a Gunner as Barcelona continue to pursue him.

Fabregas said : “I am really proud to have been an Arsenal player,”.

“I am an Arsenal player and I am really proud to be able to give this trophy to all the fans. It is for all of them – they deserve it and they have a world famous club.

“I have had lots of texts and Blackberry messages. My phone is full. I had a text from Arsene Wenger. He said congratulations, you deserve it.

“I replied thanks you very much and said this is for all the Arsenal club, manager and players who have helped me be where I am today. I am, really proud. I will never take this medal off, I have two now!”


Alonso : De Jong Tackle Was The Most Painful Tackle In My Life!