It has been reported that Cesc Fabregas is eager to avoid comparisons with Chelsea legend Frank Lampard. 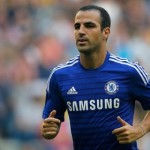 Cesc arrived at Chelsea from Barcelona just as Lampard was leaving for Manchester City – via New York City FC.

The former Arsenal star told Chelsea Magazine: “I have only just started my career here, but I don’t consider myself to be a replacement for anyone.

“Maybe I don’t score as much as Frank, but I like to assist more. For me, we are different players and cannot be compared.”

Fabregas has made no secret, though, of his desire to inherit the playmaking berth occupied by Lampard for so long.

He said: “It’s true that I have been playing in different positions at Barcelona and I learnt a lot from this as well – it made me a more complete footballer.

“However, I know my place is in midfield –I want to play there and I think the coach knows that.

“This is where I think I can give my best. It doesn’t matter if I’m just in front of the defence or playing behind the strikers, they are two positions I really enjoy.”