Cesc Fabregas has admitted that he is enjoying his football in Chelsea’s midfield. 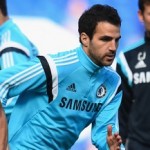 The former Arsenal star hit a superb goal in victory at Crystal Palace.

“I like to play this kind of football, and Eden and Oscar do as well, and the three of us connect very well and that goal showed well the qualities of the whole team,” he told chelseafc.com.

“Now I am playing deeper in midfield there will be moments during the season when maybe I go five or six games without a goal or an assist, and I am more proud about the team work, the discipline, the way we coped with the sending off, than my goals or my assists. I give those to other people to talk about.

“We played a good second half when 10 against 10. We did have difficulties in the first few minutes but thankfully Oscar scored a fantastic goal and it helped us, and 10 against 10 is a different game and it was a solid performance.”