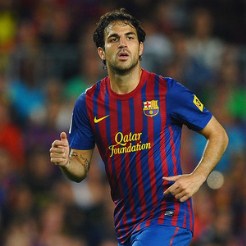 Cesc Fabregas has declared that he felt he was “stagnating” at Arsenal.

The Spanish giants paid an initial 29million euros to sign their youth team product from the Gunners after he made it clear he wanted to return to the Nou Camp.

The former Arsenal captain has spoken of his delight at completing the move but admits he faces the biggest challenge of his career now.

Fabregas told Barca TV : “The easiest thing would have been to stay at Arsenal,”

“I’m the captain, playing every game. We are always in the Champions League, always fighting for titles.

“For all that, and the tough competition here, perhaps now might be the worst time to return to Barca. It’s going to be really tough to make the starting XI, but I needed a new challenge in my life.

“I thought I’d stagnated a bit, and needed a change of scenery. I needed a special motivation to bring the best out of myself.”