Reports have emerged claiming that Cesc Fabregas could be key to Chelsea beating Manchester United and Manchester City to the signature of Barcelona defender Gerard Pique. 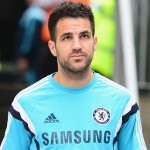 The Daily Star Sunday reported that the 27-year-old Spanish international defender is on his way out at Barcelona and Manchester rivals City and United are set to fight Chelsea to secure a £30m deal.

And the Portuguese could have an unexpected ally in the shape of superstar singer Shakira.

She prefers London’s heady heights to a life up north and also wants to be closer to pals in the capital.

Former Arsenal star Cesc is one of those she admires most and that could be the clincher for fellow Spaniard Pique.