It has been reported that Barcelona midfielder Cesc Fabregas is being hawked around the Premier League. 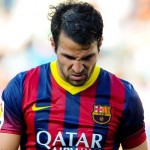 The Sunday Times reported that the Spanish giants are prepared to sell Cesc for about £40m and believe they can secure a Premier League buyer for the Spain midfielder at that price.

Chelsea, Manchester City and Arsenal have all been offered the player.

While he rejected Manchester United’s uncharacteristically public efforts to bring him back from Catalonia last year, he is understood to have grown weary of criticism of his contribution to a Barcelona season without major silverware and is exploring options away from the Nou Camp.

His status as a home-grown player for UEFA and Premier League squad purposes adds to the attraction for the elite English clubs.