It has been reported that Chelsea midfielder Cesc Fabregas is on track to breaking the record for the most assists in a Premier League season. 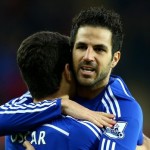 “Of course, I would like to beat Thierry’s record, but it’s not an obsession,” Fabregas told the Telegraph.

“Sometimes you go five games without any assists and all of a sudden in one game you have three. It’s always been a part of my game. I think every year I have good numbers in assists.

“I have a soft spot for assists and killer passes since I am very, very young. I like it.”

MOST ASSISTS IN A PREMIER LEAGUE SEASON