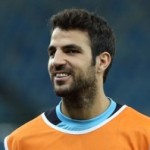 Reports have emerged claiming that Barcelona midfielder Cesc Fabregas has told Manchester United he wants to move to Old Trafford.

Woodward’s return from United’s Far East tour a fortnight ago was to push the Cesc deal along – and included a meeting with the respected Dein.

United feel Fabregas will have to make a transfer demand to force Barca’s hand, with Gerardo Martino reluctant to have his first act as new coach to oversee the former Arsenal captain’s sale.