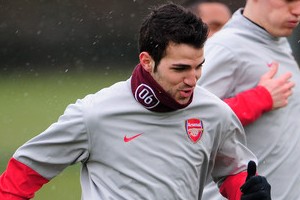 Arsenal captain Cesc Fabregas missed training on Tuesday and is a major doubt to face Barcelona in the first leg of their Champions League quarter-final at the Emirates on Wednesday night.

The 22-year-old Arsenal midfielder suffered a knee injury in Saturday’s 1-1 draw with Birmingham.

It is said that manager Arsene Wenger will leave a decision on whether his captain plays until the last minute.

Wenger told reporters that : “He didn’t appear at training because he’s not fit to play. Today he would not be available,”

Lukas Podolski Delighted To Be Back In Action For Arsenal