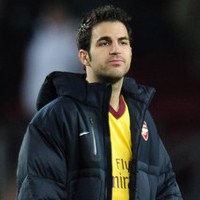 Arsenal captain Cesc Fabregas blames himself for their Champions League elimination at Barcelona.

The Spanish international midfielder apologised for the mistake which helped Barca make the breakthrough.

Fabregas, returning to his boyhood club for the first time, inexplicably tried to backheel the ball to Jack Wilshere on the edge the Arsenal penalty area, but gave it straight to Andres Iniesta – who set up Lionel Messi.

“I take full blame for the result tonight. One of the worst moments of my life. I apologise.”