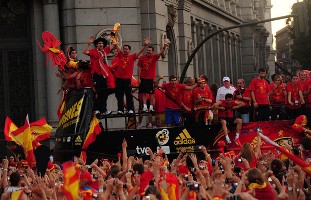 This is an interesting video of the Spanish players celebrating their World Cup final victory against The Netherlands.

It is shown in the video that Liverpool goalkeeper Pepe Reina is addressing the crowd and pulls out Arsenal midfielder Cesc Fabregas to join him.

And while this was happening, Barcelona player Gerrard Pique and Charles Puyol pull out a Barcelona jersey and puts it on Cesc Fabregas.

It was clear that Cesc Fabregas was shocked and did not know that this incident would happen. Fabregas on his part has never said that he wants to leave Arsenal.

Whatever the case may be, Arsene Wenger will definitely be unhappy with what has happened.

Could this be a sign that Fabregas Arsenal exit is imminent? What do you guys think?

Will Fabregas stay with Arsenal or join Barcelona for the coming season? Leave your comments below. Cheers!

Felipe Melo : I Blame The Vuvuzela For My Own Goal!