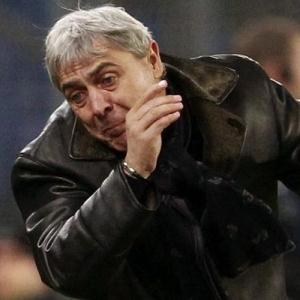 Cluj coach Sorin Cartu went beserk after his side crash out of the Champions League.

The out of control manager kicked out at the perspex glass surrounding his coaching staff as his side lost 1-0 away to Swiss side Basel.

Cartu fumed as his side recorded their eighth loss in their last nine European games.