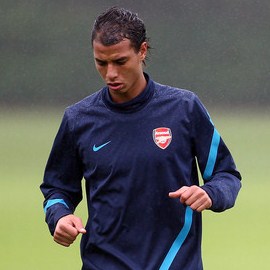 Marouane Chamakh expects to see out the season at Arsenal but will review his future over the summer.

The Morocco international, who joined the Gunners on a free transfer from Bordeaux in 2010, has started only one game in the Premier League this season.

The 27-year-old will shortly head off to compete at the African Cup of Nations next month and is likely to remain with the Gunners for the rest of this season.

“I have the idea that I will finish the season at Arsenal,” Chamakh told Sud Ouest.

“But in May and June, I will see things differently. ”

“I cannot stay in this situation forever. I’m 27, I’m a competitor, I want to play, I accept many things here because it works.

“But I cannot live like this forever. I will make a decision this spring.”

Chamakh admits he is prepared to consider a return to Bordeaux after revealing he would be unlikely to join a rival French club.,

He added: “I will weigh up the pros and cons. If I leave here, I’ll take that possibility into consideration.

“I always said if I had to return to France, it would be with Bordeaux.”