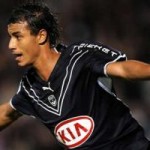 Prospective Arsenal signing Marouane Chamakh could give manager Arsene Wenger a dilemma over his political commitments.

The People says the Bordeaux star has stunned team-mates in France – by going into politics. Chamakh has joined the Forces Aquitaine party in south west France – and is due to stand in regional polls next month.

And if the Morocco international is elected he will need to attend to political matters from London while Wenger needs him to focus on leading Arsenal’s attack next season.

Party leader Jean Lassalle said: “Marouane Chamakh has not just been made to score goals – he has things to say as well.

“He had hesitated to launch out into politics because he is going over to play football in England.

“But he has the right to get involved as an Aquitaine citizen. He won’t be the first person to work away from his constituency if he is elected. He is a bloody clever guy.”