Reports are out claiming that Arsenal midfielder Alex Iwobi admits Calum Chambers was buzzing to score in victory over FA Cup opponents Burnley. 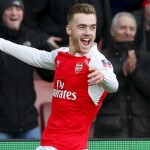 The defender scored just his second Gunners goal – both of which have come against Burnley – when using the outside of his foot to curl a sublime first-half shot into the top corner.

“Everyone was talking about it in the showers. He was like “Canaldo is what they call him now”. It’s just funny.

“I think we played very well the whole game, even though we conceded a goal from a set-piece, which we weren’t too happy about. We feel like we did very well and are confident about going through to the next round.”