Lionel Messi drew level with Raul’s Champions League record of 71 goals as Barcelona overcame a resolute Ajax with a 2-0 win at the Amsterdam Arena. 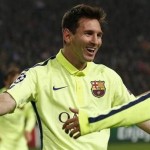 Messi headed home Marc Bartra’s cross late in the first half after Jasper Cillessen was caught in no mans land, having excellently saved the Argentine’s free kick.

And the Argentine magician was on hand to slide home substitute Pedro’s cross 14 minutes from time to draw level with the Real Madrid great, moments after Joel Veltman saw red for a second bookable offence.

The match also marked a return to Champions League action for Ajax old boy Luis Suarez. But the man dubbed ‘The Cannibal of Ajax’ during his stint in the Eredivisie looked a little off the pace and wasted a glorious chance to score against his former club, shooting straight at Cillessen when put clean through on goal.

Wednesday’s result means that Ajax are out of the competition after PSG beat APOEL 1-0 in the other group match. The French now top the table by a point from Barcelona with two games to play.

Marc Bartra On The Verge Of Signing New Barcelona Contract