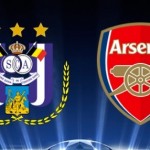 Anderlecht will be without French midfielder Fabrice N’Sakala, who has been ruled out of the clash with Arsenal due to a knee injury. However, manager Besnik Hasi has had some encouraging news defensively as former Portsmouth centre-back Anthony Vanden Borre, who suffered a torn calf muscle at the World Cup, has been declared fit and will start.

Argentine goalkeeper Emiliano Martinez is set to make his Champions League debut for Arsenal in Wednesday night’s Group D clash away to Anderlecht. Wojciech Szczesny is suspended after his red card against Galatasaray on MatchDay Two, while Colombia international David Ospina (thigh) is not match fit, so 17-year-old Ryan Huddart will be on the bench. England international Calum Chambers returns to the defence after missing Saturday’s 2-2 Barclays Premier League draw against Hull through a one-match ban. Forward Lukas Podolski is available again following illness, but Theo Walcott is still not fully match fit after his recovery from nine-months out with a knee injury. Laurent Koscielny (Achilles), Mesut Ozil (knee), Yaya Sanogo (hamstring) and France forward Olivier Giroud (fractured foot) are all out, along with long-term absentee Mathieu Debuchy (ankle). Cesc Fabregas To Feature Against Benfica On Saturday