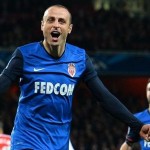 A terrible display from Arsenal, capped off with a goal from old foe Dimitar Berbatov, means they have it all to do against Monaco in the return leg.

Though Arsenal dominated possession in the first half, they failed to capitalise, and Monaco took the lead courtesy of Geoffrey Kondogbia in the 38th minute. His distance shot took a slight deflection off Per Mertesacker, which meant David Ospina was left entirely rooted to his line as the ball smashed into the net.

It was the first shot on target of the game – and the first time Monaco have scored in the first hour of a Champions League match this season.

The second shot on target came in the 53rd minute, as Berbatov – the former Tottenham man, who else? – lashed home a marvellous strike after a terrific cross on the break from Anthony Martial.

Arsenal did have some chances, but they were squandered. Olivier Giroud was the main culprit, notably firing over from six yards; however, he was not the only one who failed to take his opportunities.

Alex Oxlade-Chamberlain’s injury-time goal, a beautifully-taken curling shot from the edge of the box, had started to give them some hope for the return fixture; but the goalscorer himself was partly at fault for Monaco’s third, giving the ball away on the halfway line and allowing Yannick Ferreira Carrasco to gallop through and shoot past a despairing Ospina.